Piece of the True Cross Discovered? Does it Matter?

One of most interesting bits of archaeological news to emerge recently has been the discovery in the 7th-century Balatlar church in Sinop, Turkey (on the southern coast of the Black Sea) of a small stone box decorated with incised crosses.  Inside, archaeologists found a splinter of wood.  It is not just ANY piece of wood, they claim, but a fragment of the True Cross, the cross upon which Jesus Christ was crucified. 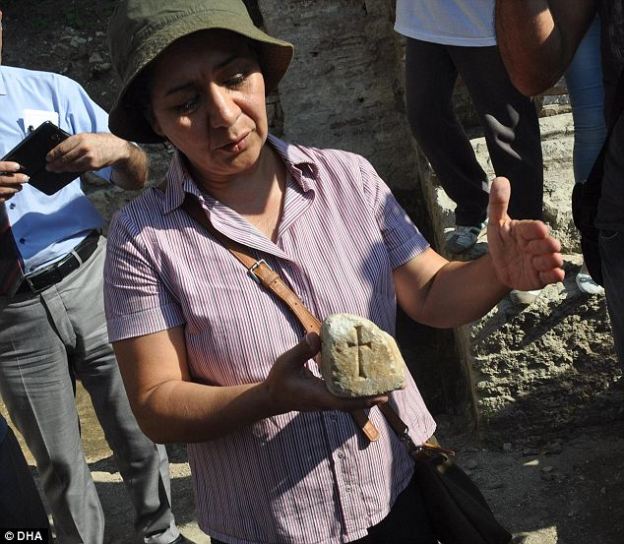 Professor Gülgün Koroğlu holds a piece of the reliquary in which the fragment was found. Photo, UK Daily Mail.

My gentle readers may be forgiven their skepticism if their first question is: “Seriously?” Logically speaking, we would be hard pressed to accept at face value claims that a piece of wood buried in a box is a tiny piece of the True Cross.  In fact, it is easy to scoff at such claims, but as a scholar with a keen interest in religious relics of several historical periods, I want to address the question and explain why this discovery is significant.

(Also, I have been extremely frustrated with the way media outlets have covered the story (see links below), trying to spin it as “proof” of Christ’s historical existence.  Despite what individuals may or may not believe about that question, a relic of the True Cross is not a piece of evidence one way or the other, and suggesting that it might be just leads people to ask the wrong questions and argue about the wrong points.  [end of soapbox])

First, I’d like to address the question of whether the relic is real or not:

Verifying the historical authenticity of relics is extremely problematic.  True Cross fragments – many of which have been identified over the centuries – are particularly questionable because according to Christian legend, the True Cross was not even recovered until about 300 years after the crucifixion, when the emperor Constantine’s mom Helena went poking around in the Holy Land. So, even if one could somehow prove that a fragment was a piece of the cross that was “found” by Helena (an impossible task, I think), one would still be no closer to proving it was part of the instrument of Christ’s crucifixion. From a scientific standpoint, I find it extremely unlikely that that object survived for 300 years to be discovered by Helena.  So my PERSONAL answer as to whether this fragment of wood is part of the cross of the crucifixion is “no.”  But that doesn’t diminish my interest in the find, nor does it mean I disagree with the archaeologists who have declared it to be a piece of the True Cross.  You see, they are not necessarily claiming it is a splinter from that specific object, but rather are announcing their discovery of a piece of wood believed in the early medieval period to be a piece of the True Cross.  There is an important distinction to be drawn between those two things, a distinction of which many who are responding to the story (journalists and commenters alike) seem to be unaware.

Piero dell Francesca, “Discovery and Proof of the True Cross”, 1466. Fresco in the Bascilica of San Franceso, Arrezzo, Italy.

A glance through the comments section of any of the online news pieces will find people lining up to mock the archaeologists who announced the discovery for their apparently un-scientific method – declaring that an object is a piece of the True Cross simply “because we say so.”  Skeptics, not content to take that declaration on faith alone, want hard proof before they will accept such a claim.  Those skeptics, however, are missing a key point:  faith is, in fact, the most important thing bearing on a relic, and faith was as important in determining the identification of the object in the historical period in which the relic was first discovered as it is now.

Let me explain.  On a recent cruise of the Black Sea on the line Voyages to Antiquity, on which I was speaking as a guest lecturer, we boarded the ship in Istanbul, where the passengers visited Topkapı Palace before we set sail.  The seat of the Ottoman sultans, Topkapı’s treasury houses one of the world’s most important collections of Muslim religious relics, an assortment that includes objects related to Old Testament figures revered in common by Muslims, Christians, and Jews.  On the ship later that day, a passenger asked me whether the Sword of David displayed in that collection is real.  I gave him the answer my students always hate to hear: “What do YOU think?”  A classic way to dodge a question with no answer – or at least no scientifically verifiable answer – it’s also the most pertinent question in this case, because the importance of relics lies in the power people assign them.  As I like to point out in presentations I give on saints and relics, whether a relic is “real” is not the important thing. The important thing is that people have agreed that it will stand in for whatever object it represents (in this case the True Cross, in others the head of John the Baptist, etc.), take on the power of that object, and serve as a focus for veneration. That converts a simple object into a source of religious and social power.

Therefore, although there is absolutely no way to verify the authenticity of the splinter of wood discovered in Sinop as a fragment of the cross on which Christ died, as an artifact it has a valuable story to tell archaeologists and historians, which brings us to the second question I’d like to address:

What is the value of this discovery?

Whether relics are “real” or not, they had real power to the people and institutions that owned them and venerated them, which means they are important in constructing a well-rounded understanding of the historical periods in which they originated. In terms of this specific example, not knowing enough about the excavation of Balatlar church to say specifically how this piece fits into the jigsaw puzzle of history the archaeologists are putting together there, it is difficult for me to make many concrete suggestions about how it might add to their analyses.

But one thing it tells them is that pilgrims would have visited this church to see, touch, and perhaps even kiss this piece of wood (although we know from historical sources that medieval churches with fragments of the True Cross quickly learned that if they allowed pilgrims to kiss the object, their relic would slowly become smaller as some visitors nibbled tiny pieces off it to carry away with them!).  With those pilgrims came many things: fame and prestige for the church; money for the church’s coffers in the form of donations; an injection of cash into local businesses as pilgrims paid for lodging, food and souvenirs; and other less-positive things such as diseases carried from place to place by religious travelers.  Pilgrims were an important part of the medieval economy, and this tiny fragment of wood may help archaeologists flesh out the story of Balatlar church, its community, and how it fit into the social and economic matrix of other communities in its region. So much evidence from one little splinter!

Articles on the find:

3 responses to “Piece of the True Cross Discovered? Does it Matter?”